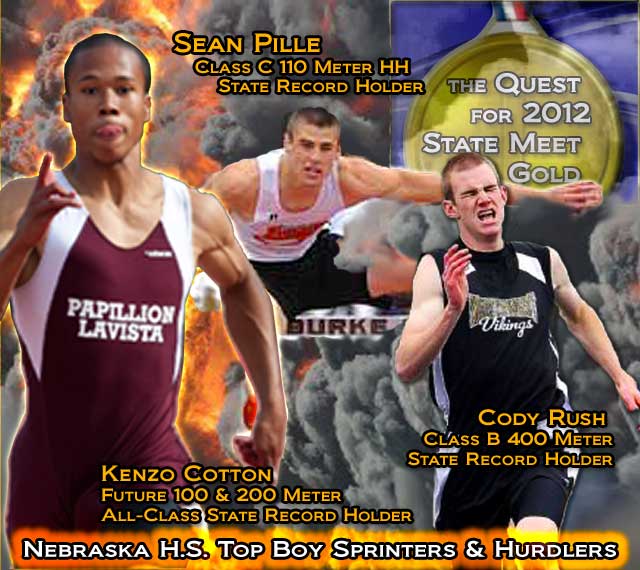 Records on the Line

All-Class State Record and Class A and B State Meet Records:


Papillion-La-Vista sophomore Kenzo Cotton will attempt to follow up on a history making freshman performance at last year’s state meet where he became the first freshman boy to win 200 meter all-class gold (21.77). Based on his 2012 season performance Kenzo is primed to set new state meet standards and/or state records in both the 100 and 200 meter dashes.

Cotton will enter Burke Stadium with Nebraska season-best times of 10.59 in the 100 and 21.55 in the 200. Both times are ranked 5thth on the all-time electronic chart as maintained by the Omaha World-Herald.

Shortly after the start of the season, the Monarch sprinter found the right formula for his previously weak starts out of the blocks, and from that point on he has consistently turned in stellar times— including two 10.4 hand-held marks (ranked 4th on all-time chart) and a 10.61 FAT victory at the 2012 Kansas Relays.

Before his high school career is over, barring injury or calamity, Kenzo Cotton will eclipse both the current 100 and 200 state records. But will it happen this weekend? The more pressing question should be will he win all-class gold in both events?

Prediction: At this moment in time Cotton is just a cut above any Nebraska boy sprinter on the scene. Only a bad start or mishap would prevent him from winning the 100 and 200 all-class gold medals. Yet bad days do happen and if Cotton has one look out for the following Class C and B sprinters that also are capable of breaking their respective divisional class state records:

St. Ceclia’s Blake Micek is Class C’s two-time 100 meter state champion and reigning 200 meter champion. The Nebraska walk-on sprinter has posted times in the low 10.8’s at the past two state meets and this year the smooth-form senior star has gotten even better. Micek recently posted PR’s of 10.6 and 21.6 in the 100 and 200, placing him in a strong position to break Class C state records in both events.


Grand Island Northwest’s Cody Rush is on progression to crack the 47 second barrier. The Nebraska recruit sprinted under 49 seconds several times last season capping things off at the state meet with a 48.38 all-class gold medal performance. This year the boy wonder has cracked 48 seconds twice! His Class B state record 47.70 ranks 3rd on the all-time chart. One week after his all-time chart run, Rush did it again with a 47.73 at the B-5 district meet. Later in the same meet, his coaches stated that Rush also ran a sub-47 come-from-behind anchor leg on Northwest’s district champion 1600 relay.

It sounds like Rush is primed to make history at the 2012 state meet.

Before Rush steps up to the plate, Class C’s Levi Gipson will take a shot at claiming the gold. The Nebraska recruit won the Class C 400 meter state championship in 2011 with a time of 48.65. Even though he has been bothered by a groin injury all season long—Gipson is still turning in mid-to-low sub-49 times. This kid can run! If he is healthy he will give his soon-to-be Nebraska teammate a run for his money.

Class A 400 Meter is a Must See Event


Folks familiar with the state meet know that the schedule of events start with Class D and in reverse progression up to Class A. So it’s very likely that the Class A boys will be swallowing hard when they see Gipson and Rush’s times posted up on Burke Stadium scoreboard.

Can Anyone in Class A Catch Rush or Gipson?

No matter what he answer to the above question track fans will not want to miss the Class A 400 meter final!  The contest will feature some high quality 400 meter boys and it is very likely to be 5 or 6 across coming down the home stretch towards the finish line.

Out of this good Class A field I believe that one of the following three boys will emerge as the Class A champion.

Teel has positioned himself to be “The Man” come next season. Since his sophomore year he has successfully ran with the big dogs, finishing 3rd with a time of 49.11 at the 2011Class A state finals. At the recently concluded A-2 district meet, Teel ran a career-best 49.05 in a come-from-behind victory over 2012 Class A season-leader James Parks.

Parks has drawn very strong interest from several D-1 programs, so it would be a feather in his cap if he could cap off his high school career with Class A championship.

Prediction: On paper the Class A boy with the best shot to win all-class gold is Nebraska walk-on football recruit Sam Foltz. The senior ran a PR 48.53 in his 2011 state meet prelim before barely losing to 2011 Class A champion Dennis Barfield (Omaha Central). Barfield is mysteriously absent from the field of 400 meter contestants at this year’s state meet.

It’s not unusual for a 400 meter boy to drop a second from his PR at the state meet; however, dropping much more time than a second is very unusual. Hence the reason why I choose Foltz as having the best shot in Class A to win all-class gold and therefore the 2012 boys Class A 400 meter state championship.

Nebraska University track and field has cleaned up this year in recruiting the top in-state kids and they are getting a good one in Sean Pille. The Oakland-Craig hurdler smashed the Class C 110 meter HH record (14.39) at last year’s state meet and he recently ran a No. 10  all-time chart 14.00-flat.

Pille also has Nebraska’s season-best 300 meter time (39.00), so we could see him claim both all-class golds.

There is no one in the state close to Pille’s times in 110 HH, but he will face several strong competitors for that all-class gold in the 300 IH, including class of 2013 Nebraska football recruit Josh Banderas.  The Lincoln Southwest linebacker is among the favorites to the win all-class 300 IH and the Class A 110 HH. The outstanding all-around athlete also has a shot to place high in the discus event.

So you see: there will be a lot of top athletic talent competing at Burke Stadium this weekend.