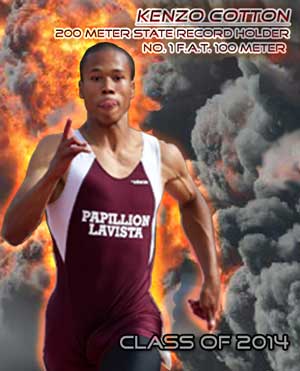 Cotton’s legal non-wind-aided JO championship time eclipses the Nebraska high school state record  21.31 mark that he set at the 2012 state meet and it moves him that much closer to his goal of breaking the 21 second barrier before he leaves high school.

Congratulations Kenzo and good luck in the 100 meter finals on Sunday!

UPDATE:  Sunday…Kenzo Cotton doubles up in Baltimore by adding the IB 100 meter championship to the 200 meter title he won yesterday.  Running into a slight headwind (-0.9), Cotton pushed out a 10.71 to easily best the rest of the field.

The Oklahoma State recruit was nudged out of the gold medal by Chicago Striders’ Dhiaa Dean (2:12.38).