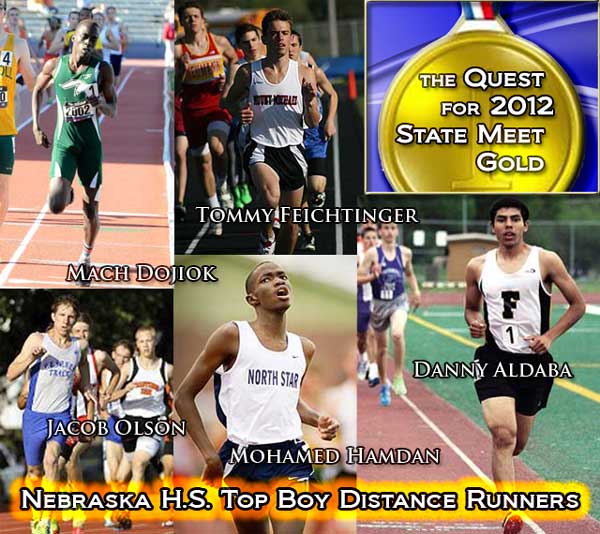 Featuring several of the state’s all-time best distance runners, the thousands of fans in attendance at the 2012 Nebraska State Track and Field Meet can expect to see some outstanding performances, thrilling finishes and maybe even a record-breaking run.

At last year’s state meet Hamdan won the 1600 all class gold, Dojiok claimed the gold in the 800, while Aldaba captured the Class A championship and all-class silver medal in the 3200 meter.

However, If you’re thinking that Aldaba, Hamdan and Dojiok are the only boys with a serious shot at winning all-class gold in 2012—think again!

Last year Tommy Feichtinger of Mt. Michael Benedictine snatched the 3200 meter all-class gold medal from Aldaba by winning the Class B championship in 9:32.50, eclipsing Aldaba’s 9:34.15 Class A winning time. Feichtinger—the 2011/2012 Class B state cross country champ—will come into Burke Stadium with a 2012 season PR of 9:27.83 in the 3200.  In comparison, Aldaba’s 3200 PR may seem insurmountable for Feichtinger, but in a race of that distance and with state meet all-class gold in the balance—a talented athlete with a strong will to win can overcome, reach out, and grab the gold. Feichtinger is a very talented runner.


Another outstanding distance runner to watch is Nebraska recruit Jacob Olson.  A couple of weeks ago the Kearney senior briefly claimed the state lead in the 800 (1:53.72), until Dojjok reclaimed it with an all-time chart performance at the A-4 district meet.

Olson will be a dangerous foe in the 800 and 1600. Yet he will need to break the spell that Dojiok and Hamdan seem to have on him. On several occasion over the past couple of years, both of the aforementioned runners have narrowly outdueled Olson for victories—which include the two crowd pleasers we saw at last year’s state meet.

Marshall Anderson, a 2010 all-class gold medalist in the 3200 meter, could also figure into the mix. But to do so the Alabama recruit from Papillion-La Vista will have to climb out of the plateau he seems to be stuck in ever since he won 3200 meter gold back in 2010. Fortunately, there is nothing like the challenge of your last couple of high school races at a state meet to bring out the best.

Every year an unsuspected athlete or two will dig down deep and shock the state with a class championship or even an all-class gold performance. Here is a look at the most likely candidates in the boys distance events: