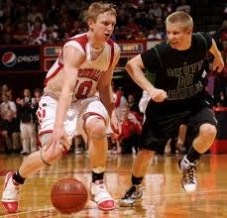 Gesell cited his belief in Hawkeyes head basketball coach Fran McCaffery and his desire to play point guard at the college level as the main reasons why he chose Iowa over several other D-1A programs that offered.

Nebraska, Creighton, Iowa State, Drake, Utah, Stanford and Northern Iowa are the other D1-A programs that have reportedly made offers to the South Sioux City High School senior-to-be.

Baring injury or any other calamity, I expect to see this kid to make his presence well-known around the Big Ten.

LaQue Moen-Davis Wins Three Gold Medals at 2011 USATF National Junior Olympics Blast from the Past: Josh Watson Makes It to Big Time in Style at Clemson

Deverell Biggs is Back—as a Husker