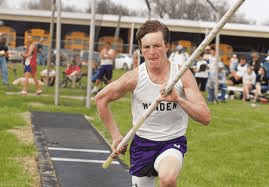 Congratulations to Minden High School pole vaulter Craig Driver for becoming the newest athlete in 2011 to enter the all-time charts for the first time in an individual event.

On May 6, the senior cleared 16 feet even at the Cozad Invite. The feat ranks 5th on the all-time charts and Driver becomes only the 7th Nebraska high school boy to ever clear the 16’ mark.

As a sophomore Driver took third place in Class B at the state meet with a vault of 14-0 and last year he placed second by clearing 14-8. So it appears as though his natural progression could earn him a spot on Class B’s top podium at this year’s state meet—and an all-class gold medal to boot. But his quest will not be easy because there are several very strong vaulters this year. Although right now Craig looks to be in the driver’s seat (pun intended).