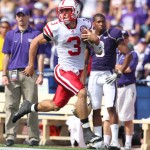 According to some online postings and a couple of anonymous Husker inside sources, QB Taylor Martinez may have expressed his intentions to quit the Husker football program as a result of  Bo Pelini tirade during Nebraska’s 6-9 loss against Texas A&M.

Rumor has it that Taylor Martinez called his father when he went to locker room after reinjuring his ankle: If true that may have been part of the reason for Pelini outburst.

Bo Pelini Looked Like a Nut in Husker Loss to Texas A&M Bo Pelini Press Conference Apology for Texas Tirade: A Little Smoke and Mirrors Can Go a long Way