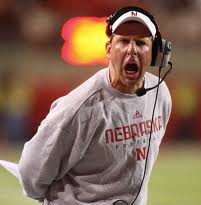 Last night as I watched the Nebraska vs. Texas A&M football game and caught the numerous camera shots of an irate Bo Pelini screaming at officials, players and his coaching staff I couldn’t help but be reminded of legendary Ohio State head football coach Woody Hayes.

You see I grew up in Columbus, Ohio and my father played for Hayes at OSU back in the ‘50’s. Consequently, I had the fortune to attend many of the Buckeye home games and to hang around the sidelines and the training facilities, and to hear stories from my father and his friends and other former Buckeye players about some of the more bizarre Woody Hayes temper tantrums that occurred throughout his coaching career.

Woody Hayes had a long, long history of infamous outburst that sometimes included striking, grabbing, and throwing things at his players and his assistant coaches. Yet everyone around Hayes placated his outburst. Even the media would laugh and joke about his sideline antics “Oh that’s just Woody” they would say. That’s just how he is. It’s how he gets his team motivated.

Unfortunately, you can also count me in as one of those people that bought into all that “Oh it’s just Woody “stuff too. But by the time I really became cognizant about the world, Woody was an unintimidating, toothless, gray-haired, chubby, old man in his mid-to-late 50’s who wore glasses short sleeve shirts and a tie. His outbursts were comical given his deportment. That is until the day when Woody struck that Clemson football player and tried to grab him by the neck at the 1978 Gator Bowl.

All of us who were around Woody should also share in the blame for how his career ended, because no one really checked him on his ugly behavior that began from the time he first started coaching back in the 1940’s. Besides, up until the ’78 incident most folks tolerated outlandish behaviors from coaches as long as the team won. Nowadays the sports world has matured in its thinking and it doesn’t look very kindly on those kinds of antics and outburst.

Bo Pelini is from Ohio and he even played for the Ohio State Buckeyes; ironically, his first year at OSU (’87) is the year Woody past away. Nonetheless, I’m sure Pelini grew up watching or at least hearing about some of Woody’s’ sideline tirades too. But Bo Pelini you are no Woody Hayes:  I’m not laughing when I see one of your blowups. You are not an old fat man with glasses and no teeth and wearing a shortsleeve shirt with a tie. You are a healthy angry-looking man wearing a sweatshirt that looks like he could still kick some butt.  Oh no Bo! When I see those eyes of yours start to bulge, and those veins start to pop out the side of your neck and the spit start to fly, I’m thinking “this guy looks nuts!”  This guy is making $2 mil a year and he looks like a raving mad lunatic that hates the world.

I’ve seen a lot of coaches get mad but Bo takes the cake! Bo Pelini looks the craziest of them all:

That’s just your style Bo Pelini? That’s just how you are? That’s acceptable?

I know his players love him—just like my Dad and all his friends loved Woody Hayes. But Bo somebody needs to tell you “You are no Woody Hayes.” At least I hope not.

Remember Bo that you are headed to the Big Ten where they have seen this act play out before—for nearly three decades. And everyone remembers how it ended.