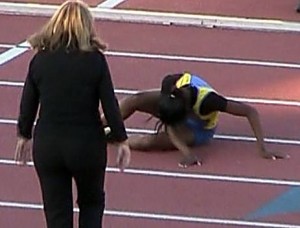 North’s Brianna McGhee crumples to ground in pain after crossing the finish line in her 200m heat.

The opening day of the 2011 Omaha Metro Track and Field Meet pulled mightily on both ends of the of the emotional spectrum for athletes and fans alike.

Perhaps no event on Tuesday tugged harder on the emotional string as witnessing 2010 all-class gold 200 meter champion Brianna McGhee briefly pull up and almost stop just before entering turn two in the 4th heat of the girls 200 prelims. McGhee managed to right herself and bravely continued the nearly 100 meters to the tape where she collapsed while crossing the finish line in 2nd place—posting a time that was not good enough to make Wednesday’s finals. The fact that Brianna was able to finish the race at all indicates that more than likely she was cramping up or suffered a very mild muscle pull.

Mach Dojiok of Benson won the boys 800m in 1:54.30, lowering his PR and state leading time and moving ever so close to making the all-time charts.

Noteworthy Performance of the Day:

She may not have come close to making the all-time charts but Breunna McCarty did post a PR and one of the fastest electronic-timed girls 100m in several years when she smoked a 12.07 in her heat. She will be tough to beat on Wednesday.

Kenzo Cotton is for real! The Papillion-La Vista freshman breezed to the best time of the day in the 200 (22.25). Cotton demonstrated nice form and seemed very relaxed and strong coming down the stretch. If Cotton keeps his focus and maintains a strong work ethic his name will appear high up on the all-time charts, before his high school career is over. I like him—a lot!

The Boys 400 meter lived up to the hype. In the final heat Central’s Dennis Barfield edged Terry Grigsby (North) and Nash Beaudin (Millard West), crossing the finish line in 49.30.  Grigsby and Beaudin crossed the tape at 49.57. The times were PRs for all three boys.  (Correction from initial, posting this was a final).

Ted Lampkin (Central) looked good in his 100m heat as he blazed to an easy 10.90 victory to lead all final qualifiers and he also won the boys triple jump (46-1).

Other Metro Track and Field Results

Kenzo Cotton (right) after winning his heat in the 100m. The Papillion-La Vista freshman qualified for the 100 finals and he posted the fastet 200m time of the day.