Omaha Metro Conference Should Take On Different Look In the Future

A question for Nebraska high school football fans: Did you feel the ground move a bit this morning?  That’s because a seismic shift in the Omaha Metro Conference has just occurred with former Husker I back Damon Benning being hired as the new head football coach at his alma mater Omaha Northwest High School.

It shouldn’t be such a shock to the system because back on December 4, 2008, myHitNews.com posted an 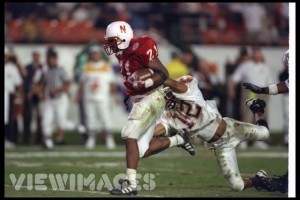 article I wrote titled Damon Benning: Next Omaha Metro Coach? Well, the question has been answered.

Damon Benning, a 1996 Orange Bowl MVP, will bring a plethora of intangible assets to Northwest, but none more important for the short term than his name recognition as a result of his relatively recent connection to a Husker Dynasty that won three national titles—Damon was a member of the ’94 and ’95 teams. Consequently, kids should be more eager to seek out the Huskies program and to buy what–Head–Coach Benning is cookin’.  However, Benning’s notoriety and been-there-done-that accomplishments are just the icing on the cake, because underneath that All-American choir boy persona of his, resides a very fertile football mind—Benning knows his X s and Os and can match wits with the best of them.

Plus Benning has the luxury of having something no other Nebraska high school coach enjoys: At the beginning of each game week, Damon is known to receive pregame strategy talks from his legendary former coach Tom Osborne.  Also– during actual games–Damon has been heard talking to Dr. Tom, on his cell phone, before critical plays. Whew! Add all this up and before you know it Northwest may have a dynasty of their own—just kidding about the Osborne thing– but not about a possible Northwest Dynasty in the futrure.

Seriously folks, Benning’s hire should a have a huge impact upon Metro Conference football. Burke, North, and to a lesser extent Central will be the schools that will feel the pinch of any success that the Huskies achieve under Benning.

The most immediate sting of the Benning hire will be felt by Omaha Burke. After the past three years of witnessing the Burke football program, up close and personal, there is no doubt that Benning’s departure must feel like a shot in the gut to the kids and the parents of the program–they lost a coach that meant a–great deal–to many players and families. Moreover, Coach Benning will take with him a wealth of invaluable knowledge that will be hard to replace.

In the long-term, Burke may also be the Metro school that is hurt the most for the same reason that a Northwest revival will hurt North and Central. That’s because the pool of talent in the Metro area is only so large and your better athletes and their parents will gravitate towards the better programs–that means away from athletic programs like Northwest! This is exactly what has been happening over the last couple of decades within the boundaries that contain these schools. Top athletes and their parents faced with a prospect of attending Northwest—found ways to avoid it at all cost—trust me, I used to live in the Northwest area.

Currently at Burke there are, I’m sure, a number of student/athletes that live within the Northwest boundaries or who recently moved away from the area. Over time, with the hoped for success at Northwest coming to fruition, more of these Northwest evaders will opt to attend their home school.

In fact, a rejuvenated Northwest football program under the direction of such a high profile coach like Benning may even reverse the trend that Northwest has endured and cause top student/athletes and their parents living within the Burke, North or Central boundaries to find ways to send their children to Northwest.

Right now in Nebraska the only other football coach that has more pressure and more expectations placed upon his shoulders is Bo Pelini. Unfortunately, for Damon, at least Pelini took over a program that was still breathing—Benning will literally have to resurrect the Huskies. That is the position that Northwest finds itself at this moment. But who knows, three years from now the Huskies may have a winning season or for that matter, Damon could be looking up at the sky—screaming to God “Why me? Oh, why me?

Tonight, I am just content on going to bed thinking that now there will be one less bad football team in the Metro Conference. Thanks to Omaha Public Schools under the direction of the Athletic Department’s Bob Danenhauer.