Breaking it Down to the Best of the Best 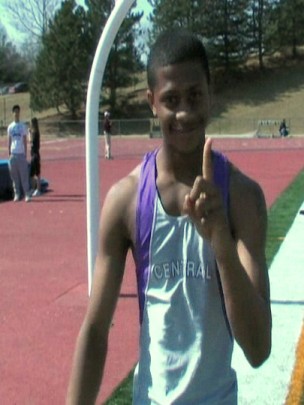 In myHitNews.com post “Poll: Nebraska HS Basketball loaded With Talent at Guard: Who Will Be the Best in 2009/2010?,”  I mentioned how talented the backcourts in Nebraska HS basketball will be in ’09/’10. In addition, attached to the post is a poll “Who Will Be the Best Guard on the Floor in 2009/20010?,’” listing 14 guards–whom I believe are among the best in the State of Nebraska. Of course, I know there are other talented guards out there. But the ones listed in the poll are definitely recognized as being in the forefront when it comes to outstanding guard play.

Most assuredly other guards will emerge this year and some of the guards listed in our poll may not live up to the hype. However, right now, the players in the poll lead the way going into the ’09/’10 season. With that said, here is the breakdown of myHitNews.com’s Preseason Top 5 HS Guards in Nebraska:

Pictured in the photo: Omaha Central’s Deverell Biggs flashes the No. 1 sign, after an early season high jump last track season. The reigning All-Gold State High Jump Champ will be even deadlier this season on the basketball court.

That’s right. Two of myHitNews.com’s Preseason Top 5 HS Guards in Nebraska are Omaha Burke players. Going into the season, Burke has the best backcourt in Nebraska. The question is: Can Burke turn this bounty into a great season and a memorable playoff run in 2010?