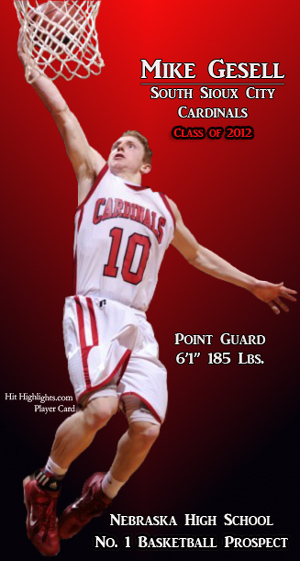 South Sioux City’s Mike Gesell once again reigns as the top boy’s high school basketball prospect in the state. It’s a MHN ranking spot that Gesell has held since his sophomore year, except for a brief period at the beginning of last season when Omaha Central’s Akoy Agau moved up to the No.1 position.

Gesell averaged 25.2 points per game last season and he played a major role in leading the Cardinals to a second consecutive Class B state championship.

Over this past summer, the 6-1 point guard committed to the University of Iowa. Fortunately, before he heads that way we get to see “the great one” play one more high school basketball season.

The Preseason Top 25 is loaded with a bunch of first time listed prospects due to the fact that 16 on the previous list were graduated seniors.

Thanks to all of you that helped out by sending your nominations and/or comments via email or through a posted comment.