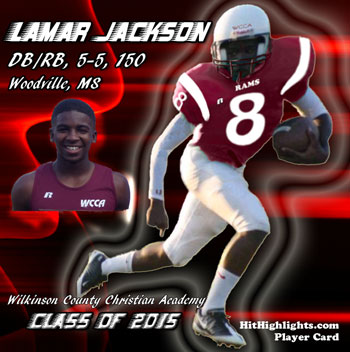 No matter what level of high school football is played, any athlete that starts as a freshman deserves major praise. Double the applause when you are a cornerback standing just 5-foot-5 and weighing only 150 lbs. Yet those were the cards that Woodville, Mississippi’s  Lamar “LJ” Jackson were dealt. So far he has played his hand very well.

In 2011 Jackson accounted for 51 tackles and had 4 interceptions to go along with 11 pass breakups. In recognition of his terrific season the talented freshman was selected first team all-district.

The Wilkinson County Christian Academy DB not only covers well—he is very good at coming up on the run. Despite his size and youth, Jackson is not timid about sticking his nose in there to make a tackle.

The young man has the prerequisites for success and plenty of time to hone those skills and to grow. If he stays focused and committed Jackson has more than a good chance of developing into a solid class of 2015 prospect.