Game of the Week: No.1 Omaha Burke vs. No.4 Papillion-La Vista

Update: Burke vs. Papillion results – Burke holds on to defeat Papillion by score of 42-35 in wild contest. 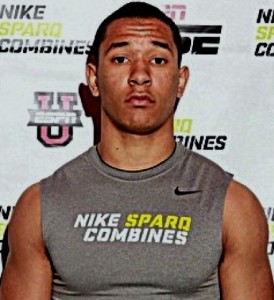 Papillion-La Vista RB Tyler Wrice has had a strong start to the season and he will be looking for more of the same in the Game of the Week against Burke.

Oh yea! This Friday we are about to find out if the No.4 Papillion-La Vista Monarchs are for real when they take on No.1 Burke.

The Monarchs haven’t exactly played the toughest schedule to date, facing Papio South, Bellevue East, North Platte and Fremont in their first four games. However, to their credit PLV thoroughly dominated those opponents on the scoreboard to a tune of 188-30 – an average winning margin of 39.5 points. Consequently, more than likely this team has the kind of muster to pull off an upset and here is why:

Head coach Jeff Govier’s Monarchs are a team loaded with more than its fair share of explosive and talented athletes. As a result, Papio will pose a big-time challenge for the Bulldogs to fence in.

The Monarchs offense, led by sophomore QB Alec Ditoro and speedy junior running back Tyler Wrice, is capable of lighting up the scoreboard on the ground or through the air. Ditoro has thrown for 837 yards and 8 TDs, while Wrice has struck six times for scores on a combination of rushes and receptions out of the backfield. But their weapons don’t end with Ditoro and Wrice. Receivers Ryan Leif and Scott Lucks have combined for over 500 yards receiving and talented senior back-up QB Trey Moore can burn you as well.

Millard North was the last quality offense that Burke faced and they were able to rush for nearly 370 yards and hang 34 points on the scoreboard. Almost all the Mustangs yardage came on the ground via QB Isaac Aakre (214) and RB Chris Bailey (147). Yet as I already mentioned – the Monarchs will be bringing a well-balanced ground and air attack to this contest — the Burke secondary will be put to the test for the first time this season.

Burke’s offense is just as prolific on the ground and through the air as PLVs, averaging 300 yards rushing and over 130 yards passing per game. Junior QB Zach Cook has thrown for 533 yards and 8 TDs and their running back combo of Jordan Nelson and Carson Collins are both averaging over 100 yards per game. And let’s not forget all the Bulldog beef up front that makes it all possible: big Hunter Greer (6-5, 280) and James Andersen (6-4, 300) will wear down and eventually break most defensive lines by the end of a game.

Prediction: Home field advantage will help the Bulldogs stay unbeaten. But Papio is more than capable of pulling off an upset here if they can get a few stops on Burke’s offense and they can keep Paul Limongi’s defensive unit playing on their heels the entire night.