Class of 2012 Football Recruting: Are You Kidding Me? 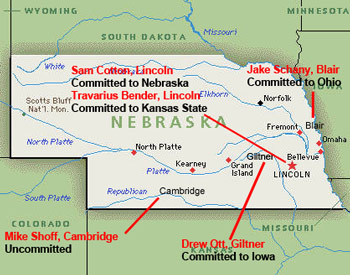 Where They Are Coming From: Nebraska high school Class of 2012 D-1A football Offers.

Are you kidding me! There are 16 Class A football teams located inside the Omaha Metro Area (17 if you count Fremont), yet not a single class of 2012 prospect from one these schools is known to hold a D-1A football scholarship.

Presently, only five prospects from the Nebraska high school class of 2012 are known to hold D-1A football offers (see map). Moreover, this is the first year in the past four that at least one new prospect has not been offered between the start and end of Nebraska’s high school football regular season.

Don’t tell me about lack of population! According to 2010 U.S. Census figures the City of Omaha’s population is 408,958, making it the 42nd largest city in the United States.

The 865,350 citizens that reside within Omaha’s metropolitan area ranks as the 60th most populace metro in America.

Let’s also not forget that this “small” Omaha Metro Area has produced 3 Heisman Trophy winners a couple of Outland and Lombardi award winners and numerous All-Americans.

In fact the only Nebraska high school prospect in the class of 2012 offered by Nebraska is Sam Cotton. Ring a bell?

Of course, if you happen to be the son of a coach or somehow related to the Husker football program you need not worry – there is a scholarship waiting for you.

Oh, I Was So Wrong: Nebraska Cornhuskers Go Backwards in 2011 Goodbye World!