Big Names in the News This Summer 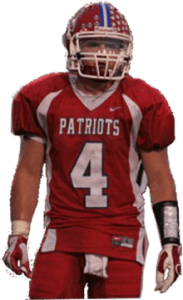 Quentin Urban — the 5-11, 185lbs standout multi-sport-athlete from Millard South hangs up his helmet and football cleats for a bat and glove.

This past December Urban accepted a football scholarship from D-1AA South Dakota. But late last month Darin Erstad, Nebraska’s new head baseball coach, offered the stud a scholarship and a chance to make a name for himself on the baseball diamond.  I guess it was slam dunk decision when a man with the professional hardware that Erstad has accumulated over his career ( three-time Gold Glove Award winner and two-time All-Star) wants to make you his first recruit.

Good move by Erstad too, considering Urban is one of the best all-around Nebraska high school athletes to come down the pike: a two-time First Team All-Nebraska football and baseball player and honorable mention All-Metro in basketball.  He will bring a lot of athleticism and a gutsy hardnosed winner’s attitude to the ball club.

Even so I’m still saddened by the fact that I won’t get to see “Q” do his thing on the football field.

Urban finished his senior year for the Patriots with a .464 batting average, 37 RBIs and 43 runs. He is tentatively slotted to play left or centerfield for NU.

Deverell Biggs — the class of 2010 Omaha Central grad was among the nation’s top 100 JUCO basketball players to be invited to the prestigious Mullen Top 100 JUCO Showcase Camp held last weekend in St. Louis. Last year 71 out of 100 campers eventually received D-1 scholarships, according to the camp’s website.

Last season Biggs averaged 14 points per game as a freshman for Western Texas.

Michelle Wallerstedt, Omaha Burke — the senior-to-be threw 136-1 to take 2nd in the young women discus at the USA Youth Outdoor Track & Field Championships. She also is an automatic qualifier for the for USA Track and Field National Junior Olympic Championships (USATF JO Championships) that will be held in Wichita, Kansas on July 27 thru August 1st at Wichita State University.