2010 Class A State Football Playoff Finals Lives Up to Hype 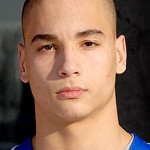 Millard North ATH Devin Bass kept raising his ante of play from the first game of season to final whistle of Class A State Championship Game.

Featuring one the most talented crop of high school football players to ever play in a Nebraska Class A championship, the Millard North vs. Millard South showdown also produced one of the more memorable Class A state playoff finals in recent history.

Millard North’s Cole Fisher may have been the only player on the field that held a D-1A offer to play football, but the overall supply of good, tough, quality high school football action on display from sideline to sideline and goal to goal was some of the best I’ve ever seen in a state final game. The Millard North and South football coaching staffs and the players are to be commended for the great show they put on last night.

I watched this game from the best seat in the house—my house–in front of my computer listening to NET‘s Damon Benning breaking down the action on the field. Damon did a nice job of explaining some of the football nuances that were taking place during the game and the strategies being employed by the respective coaching staffs. He also did a great job of anticipating what would happen on the field, which made the game even more enjoyable to watch from my warm vantage point.

We already knew that Millard North sophomore QB Issac Aakre could run well with the ball, but he stunned me with his passing accuracy and the poise he displayed throughout the game.  Millard South’s Blake Headley brought his legs to the dance rushing 8 times for 148 yards. The Nebraska baseball recruit also added 163 through the air. Devin Bass is the real deal! The kid is playmaker who possesses great burst, toughness and a high football IQ—he is a D-1A caliber prospect who could deliver at the next level. Quentin Urban can do it all!  Already having fashioned one of Nebraska’s best all-around high school football player/sport athlete careers, Urban still has a basketball and baseball season to go.

Awhile back in one of my articles, I mentioned that I needed to see more of Millard South’s Elijah Tostenson to determine his goods.  Well, I did see more—he can play!  That was a great TD catch he made and he can play defense too. It will be interesting to see where he lands. And Keep an eye out folks for Millard South sophomore DL Freeman Coleman (6-1, 230) , he shows a lot of potential.

Millard North coach Fred Petito must have ice water running through his veins and a heck of a halftime prep kit to be down 20-7 at halftime against the high powered Patriots and then come back to hang 21 third quarter points on the board. The Patriots responded but just couldn’t manage to find that one big play they needed down the stretch.