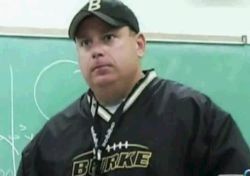 Paul Limongi’s Omaha Burke Bulldogs finish the 2010 football season 8-1 and the No.1 seed in Class A.

The emotions must have been sweet for Omaha Burke head coach Paul Limongi as he watched his star senior QB Jimmie Forsythe punch it in from 3 yards out to take the lead, and then a Bulldog defensive stop to seal an overtime victory over Class A No. 1 Millard West–the team Limongi left almost five years ago as an assistant to take the head coaching job at Burke.

Being familiar with the Burke football program since Limongi’s arrival in 2006, it was evident from the beginning that his player development strategies and strong coaching staff would eventually take the Bulldogs to the next level. Now that Burke has arrived, the question becomes  “will they be able to put an exclamation mark on their accomplishment this season by earning a trip to Lincoln and a championship victory?”

Millard West, Millard North and Millard South seem to be the most likely teams to stand in the way of Burke’s ambitions. But first thing first: before the 8-1 Burke Bulldogs even start to savor the possibility of a state title, they will have to get by their first playoff opponent Omaha North. That’s no easy task either, especially considering that Burke playoff victories have been nonexistent since Limongi’s arrival.  There is no doubt that a win next week over the Vikings would add another fancy feather to Limongi’s cap.

Success has it’s drawbacks too. Burke assistant coach Daniel Jackson–a brilliant and focused young man that introduced Burke’s highly potent pistol offense and played a huge role in the development of Jimmie Forsythe–is one of the hottest coaching prospects in the state–or in the region for that matter. So will this be his last year at Burke?

I’m sure Limongi is not looking forward to that possibility, but he has weathered a similar storm before when he lost Damon Benning two years ago to Omaha Northwest. If Jackson get’s a head coaching job or college opportunity somewhere in the near future–folks may start calling Limongi the Godfather.