The Mighty Millard Triad Football Domination: Can it Be Broken in 2011? 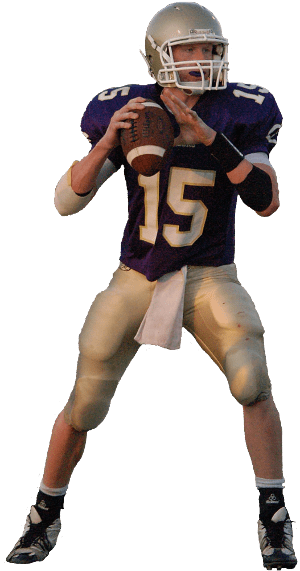 Top 5 Non-Millard Teams With Best Chance to Win Class A State Title
Remarkably, since 1995, there have only been 3 times that a Millard public high school has failed to make the Class A state football finals. And during this 16-year-long stretch a Millard football program has captured the state title on 7 different occasions – a 43% success rate.
Why Millard Football Teams are So Good

The three major reasons why Millard North, South and West have so thoroughly dominated Class A football in Nebraska are:
The historic longevity of theTriad’s success makes it almost unfathomable to not see at least one of the teams battling in the finals for the championship trophy. Accordingly, If the start of this season gives us any indication – it looks highly probable that a Millard team will make the finals again in 2011.
Pictured: Grand Island’s Ryker Fyfe looks to use his arm and legs to help propel the Islanders to 2011 state title.
A Quick Look at the Mighty Millard Triad
All three teams opened the 2011 season with a win:
Defending Class A state champion Millard North Mustangs, fueled by explosive dual-threat QB Isaac Aakre, opened up the season in impressive fashion – spoiling the debut of new Creighton Prep head coach Chris Nizzi.
Fred Petito’s Mustangs put up 35 points and over 450 total yards of O against a Creighton Prep program traditionally known to field talented, hard-nosed, stingy defenses.
Kirk Peterson’s young but superbly talented Millard West squad demonstrated in a come from behind win over Omaha North that they are also capable of taking out all comers this season.
Millard South, a team under head coach Andy Means that has made three consecutive state final appearances, graduated a wealth of talented and experiened players last spring. Yet the Patriots still figure to be in the hunt for a Class A state title in 2011.
Breaking the Triad’s hold on the state title by at least preventing a fourth consecutive all-Millard finals will be a tough nut to crack for the rest of the 25 teams in Class A.
Top 5 Triad Killers

Here are my top 5 Class A teams that have the best shot at taking down the Mighty Millard Triad:
My Sleepers
Omaha North — The Vikings are my top sleeper pick for 2011. The development of QB Zach Martin will be a major determining factor to their success. Martin throws a good ball and he can run. If the junior QB continues to improve his accuracy and game management and the Vikings running game gets on track; thereby, creating more breathing room for playmaker Terry Grigsby – they give themselves a good opportunity to capture a title. North may not always look pretty but they got enough horses in their coral to develop into a championship team. Friday’s crosstown rivalry game against No. 10 ranked Central will provide a big momentum bounce to the winner.

Kearney —  It wasn’t too long ago that Brandon Cool’s Bearcats won the state title in 2006. Year after year Cool always seems to find a way to put together highly competitive football teams. And the Bearcats always field plenty of quality athletic talent on both sides of the ball. If they get on a roll – anything is possible.
Who’s Hot and Who’s Not: Nebraska HS Football Prospects: Week 0 Hot Link: Stud Michael Minter Breaking in New Digs at Lincoln North Star