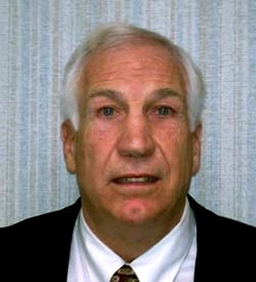 After reading the Jerry Sandusky Grand Jury report, I do not have a shred of sympathy or empathy for any Penn State, coach or administrator who became aware of Sandusky’s unseemly conduct (the records show at least as early as 1996) yet allowed this vile pedophile to continue to have unfettered access to their facilities.

There is no doubt in my mind that the ugliest set of allegations in the history of college athletics will end up revealing an institution so caught up in protecting its image and football program that it was willing to allow a monster to continue to prey upon  young boys.

The lurid and explicit details that the Grand Jury obtained from victims, under oath, on how Sandusky would go about seducing these young boys into performing sex acts, shows him to be a diabolical despicable human being who used his connections to Penn State and his Second Mile program for disadvantage youths to snare gullible underprivileged preadolescent and adolescent boys into his web of unrestrained lust.

The most demonstrative proof of Penn State’s culpability in all this and its obvious attempts to sweep this matter under the carpet can be found on page 12 of the Grand Jury report.

The evidence to just how seriously Penn State took this allegation of child rape is highlighted below in yellow, on page 12 of the Grand Jury report:

That’s right! Not only did Penn State officials fail to report this alleged incident to the proper authorities – they NEVER even attempted to find out the identity of the alleged victim.

Instead of reporting the alleged sexual assault of a minor to the police and/or to child services, Penn State officials have allowed Sandusky to maintain an office on its campus and to even be a de facto recruiter for their football team up until the Grand Jury Report released last week.

Penn State administrators knew they had a monster-of-the-worst-kind amongst them, but they made absolutely no effort to put his ass behind bars!

In my opinion much of the support for the victims of child abuses that we saw on display at Saturday’s Penn State vs. Nebraska game was a PR orchestrated attempt of damage control by the University, similar to the University’s firing of Head Football Coach Joe Paterno and University President Graham Spanier.

Nope.  Penn State you can’t’ hide from this!  It’s right there in black and white. You didn’t even bother to find the alleged victim – a 10-year-old minor – of a sexual assault that occurred on your campus. A crime reportedly committed by a former Penn State employee who still has an office and access to your facilities. Furthermore, the Grand Jury also believes that two of your employees lied to them, under oath, regarding this incident.

The above informatin is all the information that any rational person needs to know to realize how miserably Penn State failed in its responsibility to protect children.

It also appears obvious from the Grand Jury Indictment that Penn State administrators and Joe Paterno knew – years before the 2002 incident – that they harbored a serial child molester on their campus.

Penn State deserves the maximum penalties, fines, court sentences, victim awards and whatever else that can be levied against it.

As for Joe Paterno, the football coach with most wins in division 1A history, so what!

Everything you worked so hard to build at Penn State will be forever stained by your decision to pass the buck and then sit silently by, while you watched the child molester, Sandusky, come in and out of Penn State facilities for all the years since 2002.

The Sandusky Grand Jury Indictment is just the tip of a big, dirty, crippling iceberg steered into by the powers that be at Penn State.