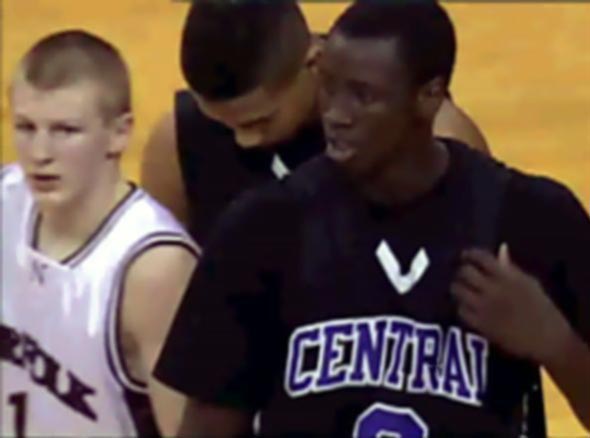 Pictured above is a 2010 MHN file photo with its original caption: “Stars in the making: Akoy Agau, (right) flanked by Norfolk’s state tournament record-breaking sharpshooter Jalen Bradley, during a lull in first half action at the Class A state finals. Central’s Darian Barrientos-Jackson (center).”

That was then this is now:

Two years ago, while watching the 2010 Nebraska High school Basketball Class A state final, it was easy to determine that both Akoy Agau and Jalen Bradley had the right kind of stuff which would enable them to become top flight players. Oh, and the guy in the middle of the picture above, Darian Barrientos-Jackson, didn’t turn out so bad either.

Agau currently holds eight D-1A offers sand the 6-foot-9 junior has helped the Eagles to win two state titles in as many years. Though his name cannot be found listed among the state’s statistical leaders in scoring or rebounds, Akoy Agau’s long-armed presence in the paint figures mightily in Central’s undefeated 23-0 record this season.

In comparison to Agau Norfolk’s 6-foot point guard Jalen Bradley holds not a single D-1A offer; however, he is the current Class A scoring leader, averaging 22.3 points per game and second in draining them from behind the arc at a rate of .436.  The senior currently has his Norfolk Panthers winding down the regular season with a perfect 21-0 record. Moreover, one of those wins was against Iowa recruit Mike Gesell and the South Sioux City Cardinals.

Bradley was MHN’s 2011-2012 Preseason No.3 Nebraska high school basketball prospect for a reason: The kid can play! He will play in college – hopefully it will be at the D-1 level.

This year should mark the third year in a row that Central and Norfolk have met in the state playoffs. Central easily won the 2010 state finals 71-58. The two teams met in the semifinals last year, where the Eagles pulled out a win by an almost identical score (73-59).

Are the Eagles still 13 or 14 points better than the Panthers?  Probably they are.

For Norfolk to pull out the improbable victory over Central It will be up to Panther head coach Ben Reis to figure out a game plan that will work – his troops must execute that plan to perfection. Most importantly, Bradley and the rest of the team must be on fire, on that cold winter day when they face the Eagles.

Our new Wapple powered mobile site will automatically detect if your browser belongs to a mobile device. It will then render the pages according to your device-type: from basic web browser phones to top-of-the line smart phones and tablets.

As a result of the move more of the MHN website is now accessible through your mobile device including the ability to post comments.