Halloween came early this month for the Texas Longhorns, as they continue to spook the Nebraska 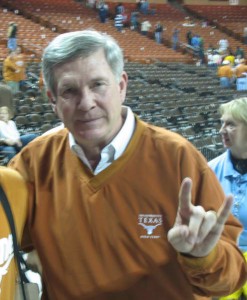 Mack Brown: the highest paid coach in the land with a $5,100,000 annual salary. No wonder he owns the Huskers.

football program—this time upsetting the No. 5 team in the nation in their own backyard.

In retrospect, the outcome of this game should have never been in doubt: a Mack Brown coached Texas team has never lost in Lincoln since he took the over the reins in 1998.  Brown is now 4-0 at Memorial Stadium and has won 7 consecutive meetings against Nebraska.  The only blemish to his 8-1 overall record versus the Huskers occurred in the 1999 Big 12 Champion Game, where the Longhorns lost 6-22, after having previously beaten Nebraska 24-20 that same year.

This game was billed as Nebraska’s revenge for last year’s thrilling 12-13 last second loss to Texas in Big 12 Championship Game.  The outcome of that game was decided by a controversial decision by the officials to add one more second onto the clock–after the Nebraska team had already rushed onto the field in celebration, believing that time had expired and the game was over. Minutes after the chaos and confusion was settled,  the Huskers watched Texas kicker Hunter Sullivan’s  46 yard game-winning field goal sail over the crossbar.  And ever since that moment ten months ago, the Nebraska football team and their faithful followers pointed to this day to exact revenge. But Mack Brown and the Longhorns had other plans.

Mack “Big Money” Brown–the highest paid college coach in the land at 5.1 million dollars per year–and his 3-2 Longhorns entered this Big 12 showdown unranked and facing the distinct possibility of suffering their third consecutive loss of the season.  In lieu of experiencing that fate for the first time in his 13 year tenure at Texas, Big Money and his staff flew into Lincoln with a game plan to stop the prolific rushing attack of Husker redshirt freshman QB Taylor Martinez, who entered the contest with over 700 yards rushing and 12 TDs on the ground. The plan: two Longhorn defenders would shadow Martinez’s every move. The Texas strategy worked to perfection, as the explosive Martinez was held to only 21 yards on the ground and limited to a dismal 4-12 passing for 46 yards, before he was replaced midway through the third quarter by last season’s starter Zac Lee. And Texas held on to win the game by the score of 20-13.

Texas’ well-executed defensive strategy combined with an unexpected strong rushing performance by Texas QB Garrett Gilbert exposed the Huskers for what they really are at this stage in the season.

What’s wrong with the Huskers?

So were the Huskers overrated from the very beginning or does this 2010 team just have a problem playing at home?

Big margin victories against Washington and K-State on the road and their poor showing in Lincoln’s Memorial Stadium nearly a month ago against Idaho State and Texas on Saturday afternoon indicate that the answer may be a little bit of both.  Keep in mind that the Huskers accumulated their wins this seasons against comparatively far less talented opponents.

“Facing an opponent of equal caliber–the 2010 Huskers revealed the mystery as to how good a team they really are: a very talented bunch that’s missing some key pieces to seriously contend for a national championship.”

Ultimately, winners of college football national championships are decided by the productivity and leadership at the QB position. Unfortunately, at this moment the QB position is Nebraska’s Achilles heel.

Taylor Martinez is an exceptional athlete, but at this stage in his career he is only a one-dimensional threat– running the ball.  And  whenever the 2010 Nebraska team faces a similarly talented  group, those opponents will possess the kind of athletes that are capable of shutting down Martinez and forcing him to beat them with his arm—a la Texas Longhorns style.

Bo Pelini and offensive coordinator Shawn Watson’s decision at the beginning of the season to tap Martinez as the starter over the more experienced and seasoned senior QB Zac Lee is coming home to roost.  A Nebraska team without a strong signal caller and missing a dominate game-changing defensive force like they had last year in Nadamukong Suh is merely an above average team at best. The Huskers will have to rethink and retool their offensive attack, if they have any ambition of finishing the rest of the Big 12 regular season schedule unscathed and landing a berth in the conference title game.

Big 12 to Enjoy Every Nebraska Loss

The Nebraska Cornhuskers’ unceremonious defection this past summer to the Big Ten Conference has stirred up a lot of resentment among the remaining Big 12 teams as well as within the corridors of the Big 12 Conference headquarters, located in Irving, Texas. You can bet that after Nebraska’s loss to Texas, Big 12 Commissioner Dan Beebe and the rest of the folks at the 400 E. Carpenter Freeway facilities will be cheerfully fist pumping and slapping high fives to one another once they return to work on Monday.