Nebraska vs. Iowa Football: Who Has Best Chance to Play in 2011 Big Ten Championship Game?

Take the Poll at the end of this article to vote for the team with the best chance: Nebraska or Iowa? 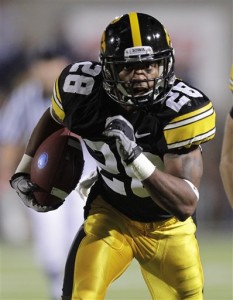 Spring football is in the books for the Huskers and Hawkeyes. So what did we learn from the experience about both teams’ chances next fall?
From where I sit the answer is pretty much the same as before spring practice began: Nebraska has a lot of unanswered questions on offense and Iowa’s has a lot of holes to fill on defense.
Taking a look at Nebraska and Iowa’s 2011 football schedules, Iowa stands a much better chance than Nebraska to finish with a record good enough to win their division. Of course that is by no means a given. But when I look at Nebraska’s monstrous 2011 Big Ten schedule I can’t help but say “damn!” Pardon the language but…
Pictured at left: Iowa Hawkeyes First Team All-Big Ten DB #28 Shaun Prater (Omaha Central Class of 2008). Prater is listed as a 2011 preseason All-American DB by various sports publications.