Game of the Week: Central vs. Burke, Expect More of the Same 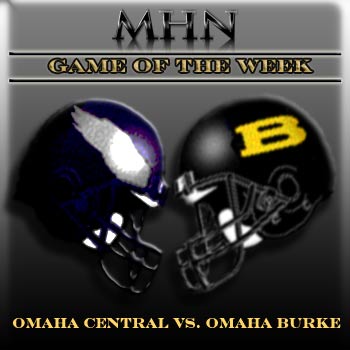 Omaha Burke looks like a sure fire bet to beat Omaha Central in Friday’s Class A football state playoff semifinal. I mean look; Burke head coach Paul Limongi owns Central! During his six years at Burke, Limongi teams have faced Central on 4 occasions — they whipped them each time, including this year’s 14-7 season opener victory.

On the other side of the ledger, you have Omaha Central head led by coach Jay Ball, who until this year has not accomplished much for Eagles football since his first year ( 2007)when he guided them to a state championship.  In addition, Central’s 2011 regular season 8-1 record came by way of a relatively soft schedule in comparison to Burke. The only other quality teams they faced were Millard North and a young Millard South squad: they barely got by the Mustang’s 30-28, handled the Patriots 42-27 and of course lost to Burke.

The Eagles finished the 2011 regular season with Class A’s second best defense, allowing just over 220 total yards per game. Burke finished the season as the class’ No.1 offense, gaining a whopping 477 yards per contest.

Somethings got to give.

Once again this year Jay Ball and the 2011 version of his Eagles will attempt to upend the No.1 ranked Bulldogs at Burke Stadium. Ball couldn’t do it earlier this year – nor in previous years – and nothing I see from Ball and/or his Central squad lead me to believe that the outcome won’t be more of the same, on Friday night.

Burke makes it to Lincoln on Nov 22.

Central Burke may be the MHN Game of the week but that Papillion-La Vista vs. Lincoln Southeast game could be a real thriller. This year you never knew what the outcome would be when the Monarchs line up against an opponent and so it is again. I’m not touching this ballgame except to say that – on paper – Lincoln Southeast should win. But scissors can cut paper.